Fnurgn
Hi Folks, I've been playing Warhammer Fantasy from early days, although have just gotten back into it after being absent for a number of years. This blog is to record thoughts and experiences from amongst myself and friends. Personally, I am currently working on Orcs & Gobbos and also have High Elves, Skaven and a few Warriors of Chaos. Amongst the other chaps we have every other army covered. We are not die-hard competition gamers, but enjoy the game for the social aspect as well as the hobby side of collecting and painting.

Well I finally got to have a game last night against a good mate. My second under the new rules :P.

My army was as follows:

Ideally I would have liked to roll with a mangler squig and a pump wagon, but the models are not complete yet. I don;t field artillery as my army themese tend to be more along the lines of raiding groups that dash out from the mountains for a quick fight then scurry away again.

My General was plonked in with the night gobbo spearmen as was a night gobbo shaman, the BSB and the level 4 shaman joined the savage orcs, the remaining shaman was put down on his own.

My opponenet had:
The Lord joined the Nurgle Knights, the BSB was with the Slaanesh Knights, the wizards were split between the foot units, the Exalted Hero on the steed of Slaanesh was put down on his own.

The game was a pitched battle.

This was my deployment: 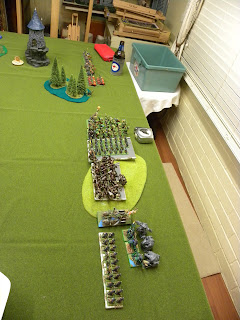 For some reason the picture of the CW deployment didn;t come out, but basically the Knights were dwon the bottom opposite my archers and Trolls, then next to the were the Marauders cav and the two units of foot troops. Here is a shot of the Knights: 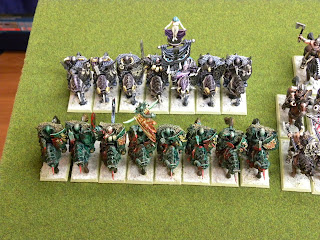 And another of one of the warrior units: 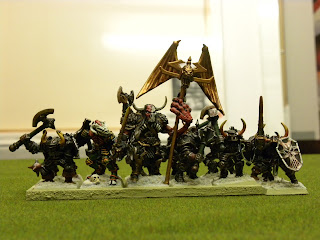 The CW went first and the fast cav ran up to drag out any fanatics in the archers. Out they popped - I aimed one at the fast cav and sent two forward in the direction of the Knights. The first one failed to hit the fast cav and the other two just bounded towards their destination. Other movement was basically uneventful, as was magic. In my first turn one of the fanatics spun off the board and another ran headlong into the third lol. Three fanatics gone :). The gobbo chariot charged the fast cav and everyone else moved up. The chariot did enough to rout the Marauders (after taking two wounds) but it failed to catch them. Magic was uneventful. 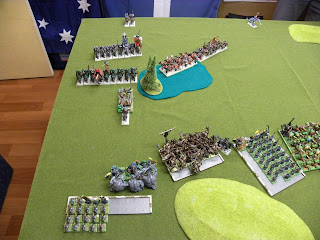 In the warrios second turn the gobbo chariot was taken out by the spit attack of the Lord. All the troops basically stood back waiting for me to commit somewhere except for the mounted wizard that ran up right next to my General and then proceeded to take two wounds off him using that spell where you have to roll a D6 and add your leadership (I failed to dispel it ><).

In my turn 3 the trolls got a long range charge off against the first unit of Knights. The black orcs swung around a bit to face that flank and everyone else moved up. 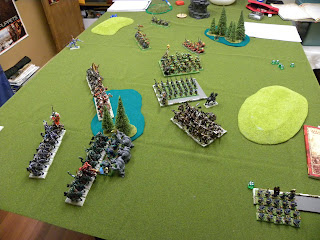 Well, the frenzied Knights and the Chaos Lord managed to dispose of 2 trolls. In return I took out 3 Knights but I failed to hang around the Trolls were run down (that's what you get for bringing unpainted troops to a game!). One of my level 1's managed to get off the Vortex spell that took out about a quarter of both the foot units. They both stayed put.

In his turn, the Nurgle Knights with the Lord charged the Black Orcs and the Hero on the steed of Slaanesh charged the savage orc boar boys. 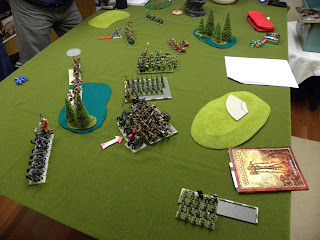 I went with double handed weapons with the black orcs to try and at least wound a Knight. Basically he killed a bucket load of me and I killed one of him and I passed my steadfast roll. The exalted Hero killed my champion (he challenged), one combat by one, routed the boar boys and ran the down...oh the humanity.

During my next turn the Warboss's unit charged the warriors with double handed weapons and the savage orc biguns charged the other warriors unit. In a fit of madness I also had the wolf riders and the spider riders charge the exalted hero (thinking that with all those spear attacks I would at least get a wound or two). The Nurgle knights with the Lord finally routed and ran down the black orcs. In the night gobbo unit, My Warboss did 3 wounds to his champion in a challenge and the night gobbos did squat. He killed a bunch of night gobbos in return and the round ended in a draw. At least the biguns chewed through the other warrior unit and ran the down. The spider riders and wolf riders failed miserably, got chopped up and bothe fled. He chased the spider riders but didn't catch them. 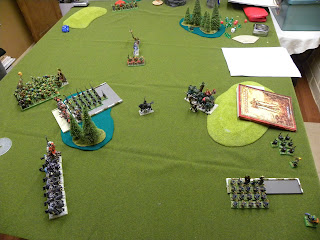 In the next chaos turn the slaanseh Knights charged into the flank of the night gobbos, the exalted hero chased won the spider riders and the nurgle nights with the Lord swung around to face the middle. 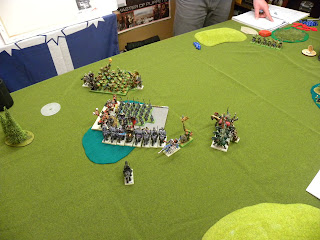 At this stage we had been going for a long time (our games tend to be somewhat social affairs) and I called it. Grats mate - I had fun, as always.

Points of note:
Charging the exalted hero with my fast cav units was a big mistake. The gameplan for those two units was to mop up straggling or fleeing opposition units and I strayed from that. Even if I had won combat by a point or two he could well have stayed put and then proceeded to chop me up.
Magic was rather uneventful other that the one vortex spell. My Level 4 basically did nothing as everything he tried was dispelled (the dice were not with me).
My setting up could have been better - I was placing my strong units down too early before knowing where his hard hitters were.
Frenzied Nurgle Kinghts are not fun :P.

Onwards and upwards!
Posted by Fnurgn at 20:38